Drones, or UAVs, are a type of aircraft that don’t require a human pilot. Instead, they are controlled remotely by human operators or artificial intelligence.  They’re able to navigate the world with with the help of Global Positioning System (GPS).  Use of drones range from recreational to military through surveillance or spy drones.

As this is a new technology, we’re finding that there are both negatives and positives from their use. 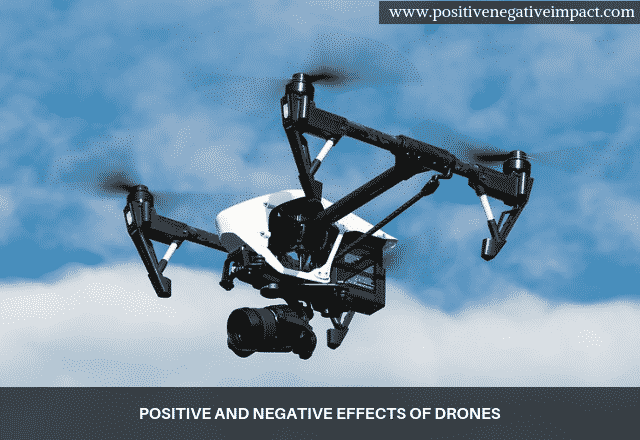 The Positive Impact Of Drones

Drones were originally pioneered by the military. It assisted army officials in executing missions that were thought to be too dangerous for humans. Besides the military, the use of drones has expanded into commerce, recreation, science and agriculture.

Assist research
At one point, scientists had to be physically at the location they were studying, often for months. This terrain could even be fatal, as seen by the many deaths of scientists and explorers in Antartica over the last 200 years. Now, scientists are able to observe our world, often from the comfort of their own lab.

Drones monitor shorelines and rivers to predict flooding and document erosion. They track deforestation in remote parts of the rainforest. They keep an eye on our glaciers and document them melting.

Wildlife conservationists face two major obstacles to their effectiveness – manpower and resources. Drones alleviate this by providing a cheap and effective alternative. Through drones, scientists are able to physically track movement and behavior of endangered species. Groups like the World Wildlife Foundation even use drones to fight animal poaching.

Deal with wildfires
As our climate changes and fires have become more common in dry regions like California, drones have become helpful in identifying wildfires, and evaluating movements. With these devices, we’re able to deal with fire without any loss of human life. As technology progresses, we may even be able to fight fires from remote locations with chemicals and water.

Logistics and delivery won’t remain untouched by drones. Amazon and other ecommerce retailers are experimenting with drone technology. Smaller drones will drop your orders directly at your door at a fraction of the time traditional deliveries take.

Even the United Postal Service (UPS) is getting into the drone market. The FAA recently certified a national drone airline under UPS. Moving forward, they will be able to deliver packages across the US via drones.

Low cost:
Because drones don’t have to accommodate human pilots, they are more compact and cheaper to manufacture. This makes buying, maintaining, storing, and fueling drones cheaper than planes or helicopters.

Drones are less dangerous to operate than planes or helicopters, especially in combat situations.  You’ll never have to worry about pilots being killed if they’re shot down, as the operator is often times on the other side of the planet.

Accuracy:
Drones are highly precise in their operation even from far distances. Their accuracy can prevent unnecessary  harm to civilians and infrastructure during military operations.

As long as they have fuel, drones can operate almost indefinitely.  Pilots can rotate out, making sure everyone is fresh.  Many are completely automated, ruling out any possibility of user fatigue.

Drone attacks adversely impact the environment and health of the population near the impacted area.  Explosives can create harmful pollutants, especially used in densely populated areas.  When buildings and infrastructure are destroyed, toxic materials like asbestos and other carcinogens are released in the air.  Though not a drone strike, a recent example of this is the after effects of the World Trace Center collapsing in New York City.  Decades later, hundreds of fire fighters have died from the toxic materials released during the building’s collapse.

This doesn’t even cover what happens when environmentally hazardous locations are targeted.  A strike on water treatment plants or nuclear reactors could leave vast regions uninhabitable.

Puts civilian lives in danger
Though drones have the potential to drastically lower civilian death counts, they’re still subject to human error.  Since 2004, the United States has killed 300+ civilians in Pakistan alone.   More recently on September 18th, 2019 a strike in Afghanistan killed 30+ civilians in one day.

Because drone technology is so cutting edge, we don’t know what the future holds for them.  As with many technologies, the government has the potential to hinder future development or even outlaw them.  Thousands of companies that are spending millions on R&D could find their investment worthless overnight.

On September 14th, 2019, the Abqaiq processing facility in Saudi Arbabia was destroyed in a combination drone and cruise missile attack.  As the technology becomes more accessible, there is the potential for more terrorist groups to pull of similar attacks across the world.