Inflation occurs when the price of goods increases at a sustained rate, and the purchasing power of money decreases. Inflation itself isn’t always a negative.

In fact, having low levels of inflation can have a positive impact on the economy. It’s when it hits extremes that it becomes a major problem. As seen in countries like the Weimar Republic that had hyperinflation, it can cripple an economy. Savings are devalued and the value of basic goods rises to the point that money becomes worthless. Many countries use centralized banks like the FED in the USA to control the money supply to prevent this. Let us look into some of the positives and negatives of inflation in more detail. 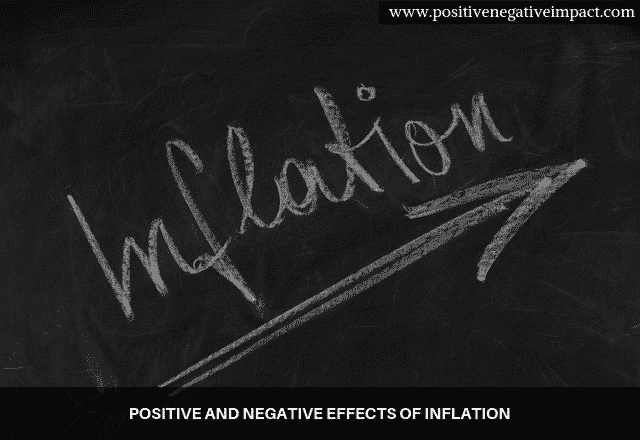 The opposite of inflation is deflation. Goods good cheaper and currency gets more valuable. While this sounds good in theory, economists agree that this results in lower consumer spending and economic growth. People tend to wait as goods become cheaper, hoping to get the best deal. Inflation actually encourages people to spend their money as it is actively getting less valuable.

Inflation decreases what is known as the real value of debt. As money becomes less valuable, so does the debt someone holds. It is easier for borrowers to make payments and potentially take out new loans to invest in the economy. Deflation does the opposite. Because your payments remain the same, as the value of a currency goes up, payments become more expensive.

The Economy Is Growing

Though it isn’t directly caused by inflation, moderate levels of inflation are a sign that the economy and wages are growing.

Supply and demand cause the price of goods to be constantly in flux.  Inflation provides a window for goods to seamlessly move and find their real value.

As a currency loses its value, it becomes easier to give raises to employees.  While overall purchasing power doesn’t change much, morale and productivity tend to rise when people receive raises.

Certain sectors actually benefit from high inflation, like real estate.  This boils down to a few reasons.

During periods of high inflation, confusion and uncertainty can ripple into the economy as a whole.  Instability grows and companies are unwilling to risk investments.  This is usually followed by an economic contraction.

A relatively high inflation rate can make exports uncompetitive. This can lead to trade deficits and slowed economic development.  This is a major problem for nations that can’t devalue their currency, like in the European Union.  Without the ability to devalue the currency, it can be difficult to re-establish competitiveness.

Reduces the value of savings

As I mentioned before, inflation results in the devaluation of static sums of money, like debt.  This will also affect things like savings accounts, that have interest rates that will never keep up.  Event assets like stocks and bonds that are traditionally seen as safe can devalue if inflation is high enough.

In many situations, when inflation outpaces wage growth, a reduction in the real earnings of employees occurs.  This problem has been apparent since the 2008 recession.  Economic stagnation and wage growth have stalled wages, while inflation rates have remained consistent over the last decade.

The real income of any individual is the buying potential of his income.  For people who fall under the category of the fixed-earning group, like pensioners,  that their real income will decrease.  This is particularly harmful to older people.   This will also negatively affect the economy at large as many will have diminished purchasing power.

The benefits of inflation are largely realized by people with a higher income.  Large assets appreciate, while wages often have a difficult time keeping up.  As a result, real income and purchasing power decrease, increasing the wealth gap.

Economics In One Lesson By Henry Hazlitt

Economics 101: From Consumer Behavior to Competitive Markets By Alred Mill