The Columbian Exchange happened at the time when Christopher Columbus presented mercantilism concepts to the world. As sailed through the Atlantic Ocean, he brought sugar plants, horses, and other contemporary stuff along with him. His objective was to give back chocolate, potatoes, sugar and tobacco to their home market. Another thing that he did was that he introduced disease to the world as part of this exchange that negated a few of the benefits that came along with the trade. The result of both of these things was unpredictable. We gained historical hindsight to find out the advantages or drawbacks of Columbian Exchange. 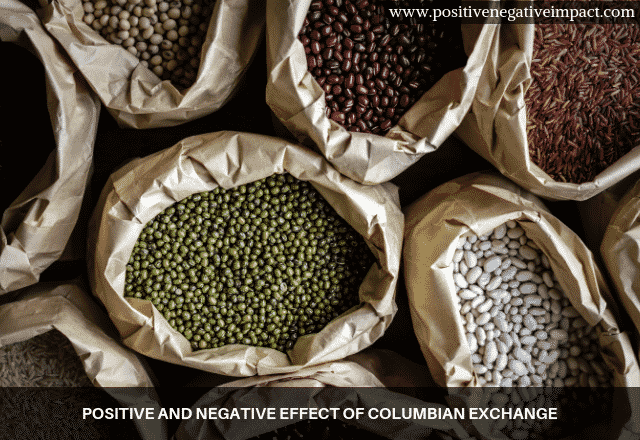 The first and foremost positive impact of the exchange was seen as the introduction of new crops. These were corn and potatoes in the existing market. It resulted in the increase in the food supply. With more amount of food being available to people, the entire European population began to get high level of the nutrition. This greatly improved their health.

Europe was greatly benefited with the arrival of maize and potatoes to the continent. The result was an enhancement seen in the diet of Europeans and reduction in the price of food. With more amount of food available in the market, the life expectancy of Europeans increased. They lived for a longer time post the exchange, and very fewer children got died due to infancy.

The long-term advantage of this exchange was seen in the form of fewer deaths among women due to birth of child, and fewer death of children due to early childhood ailments. The outcome was seen as an increase in the overall population of Europe. This led to the agricultural revolution, that involved new ways for crop production. This enabled the cultivation of crops in large amounts that were sold for a very low price. This freed a lot of people from performing agricultural activities and also allowed them to spend funds on items besides food. All these happenings led to the Industrial Revolution.

Another positive impact of this Columbian Exchange was related to the distribution of different types of food to areas where it was not present.  This exchange allowed European people to reap the advantages of various nutritious foods from America. These included foods such as corn, tomatoes and potatoes.  All of them were highly essential for European population. Columbian exchange also contributed towards the worldwide trade for food. The European colonies received wheat grain and livestock in abundance.

One of the major negative effects seen by the Columbian Exchange was the spreading of disease. This destroyed the new world. Though, Christopher Columbus did not do it purposely via the exchange platform, but it gave rise to several diseases in Europe like smallpox. Around ninety percentage of the total native population got killed by the spreading of this ailment.

Impact of disease on animals

Besides humans, animals were also greatly impacted by the spreading of germs at the time of the Columbian Exchange. The livestock purchased by Columbus attacked the llamas and alpacas that were heavily used in the US. Rats could get on the ships that were coming to the Caribbean islands. In this way, the Caribbean island got infested with rats that contaminated the food supplies. Introduction of chiggers at the time of the Columbian Exchange, also developed a new risk of an insect that created a deadly infection among humans and animals.

Columbus had an evil thought of slavery

When Columbus reached Bahamas, he made an intent to trade everything that the people at this place owned. He was impressed by the good built and fine features of people in Bahamas. Columbus decided to subjugate all of them and make them their slaves. He also self-confessed to force tribal people into slavery as it will assist them in learning a lot about that side of the world.

Columbus Exchange was harsh against people who violated

Gold was the basic requirement for Columbus at the time of coming to the New World. He would use it to fund business activities, and invest it in royalty. He believed that there were vast fields of gold in Haiti, he ordered men of fourteen and more than fourteen years of age to accumulate a specific amount of gold every three months. Failing to meet the quota, would get punished by Columbus in severe ways. Due to lack of gold, a vast population of the natives got destroyed by the crews.

This exchange was also known for the rats, weeds and grasses that got introduced. All of these plants took over crops, forests and fields to build environmental issues in the world.